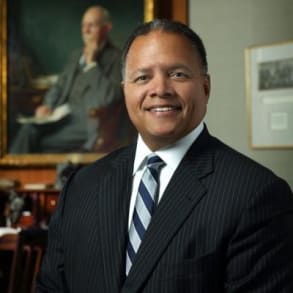 Dr. Robert Higgins is the surgeon-in-chief of The Johns Hopkins Hospital. He is a leading authority in heart and lung transplantation, minimally invasive cardiac surgery, and mechanical circulatory support. His scientific interests are broad and far-ranging, including the mechanisms of cell injury in failing hearts, health economics and policy, racial disparities in post-transplant outcomes, access to care and improving outcomes among heart failure and cardiac surgery patients. Dr. Higgins is also the William Stewart Halsted Professor of Surgery and director of the Department of Surgery at the Johns Hopkins University School of Medicine.

Dr. Higgins came to Johns Hopkins from The Ohio State University, where he was professor and chairman of the Department of Surgery, as well as surgeon-in-chief and director of the Comprehensive Transplant Center at Wexner Medical Center. Prior to that he began his surgical career as the director of heart and lung transplantation at the Henry Ford Hospital. Under his leadership, the transplant team performed the first lung transplant in Southeast Michigan and he went on to create a Medicare approved lung transplant program in 1997 and a pediatric heart transplant program in collaboration with the Children’s Hospital of Michigan. Since then, he has served in numerous leadership positions, including chief of cardiac surgery at The Ross Heart Hospital in Columbus, Ohio; chairman of cardiovascular-thoracic surgery at Rush University Medical Center in Chicago; and chairman of cardiothoracic surgery at the Medical College of Virginia in Richmond.

Dr. Higgins obtained his bachelor’s degree from Dartmouth College and went on to earn his medical degree from the Yale School of Medicine, followed by a master’s degree in health services administration at Virginia Commonwealth University. He completed a residency in general surgery and served as chief resident at the University Hospitals of Pittsburgh. He was a Winchester Scholar and fellow in cardiothoracic surgery at the Yale School of Medicine. Dr. Higgins served as a senior registrar in transplantation at the renowned Papworth Hospital, the U.K.’s largest cardiothoracic surgical program and its main heart-lung transplant center. He also served as a Major in the United States Army Reserve Medical Corps.

Dr. Higgins has held leadership positions at various organizations, including president of the United Network for Organ Sharing, president of the Society of Black Academic Surgeons and president and founding member of the Association of Black Cardiovascular and Thoracic Surgeons.

Paying it Forward, Giving it Back

Powered by the BroadcastMed Network